As others have mentioned.
The trac bar bracket is merely an afterthought, didnt get the attention that the other brackets did during design.
I opted to leave the trac bar bracket off until putting the axle under the jeep, and letting it rest on its own to use straps to center the axle under the chassis.
Well....the trac bar bracket is laughable, and isnt going to fit a stock jeep with an 8.8 swap.
Other than that, both of the lower control arm brackets were over bent, not allowing the lca to slide into place( caught this and opened up the bracket before welding)
The sway bar mounts, due to the bend radius/airgap of the uca bracket, actually sits smack against the uca bracket, in order to get the proper width and center.
I think someone over in the bending dept bent thes with a .0625 material offset, didnt set the back guages correctly, as throughout the setup, everything was just a bit off according to BF instruction.
I put the bracket where they suggested, the bolts that go through the uca and lca would not be sqaure in their bushings.
My shock brackets fit fine.
Other than that...pretty decent, wont be buying or reccomending, seems a lot of companies out in Az have gotten lame, these guys must roll with Zack at 505. 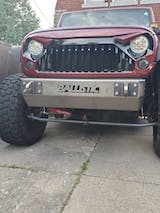 Certainly a high quality item for sure! Seems to be all products that come outta Ballistic is incredibly beefy

I bought a pair of right hand and left hand tube adapters for a set of control a try ms I’m building. Fit and finish are perfect. They arrived a little dirty, but nothing a little acetone couldn’t fix.

Product works great on my link arms for my YJ Unlimited!

Wrench seems to be of excellent quality

Such and easy thing to do with this kit, lined up perfect. Order the shaved gears with the kit it will make your life easier

These worked great for my bronco roll cage. They make great mounting points to strap stuff to as well.

Installed these into a Ford axle that had plastic bushings as I plan on going to bigger tires. Went in no problem and the roll pin was easy to tap into place when everything was lined up. It took a little extra effort to hold the knuckle up and tap the bushing into place. Everything went in solid. These should last me a lifetime. Definately not something I want to save money on just to replace at an inconvenient time.

Had an issue with a box being delivered and missing half of my order due to a hole in the box..... called explained the issue. Without a hesitation was told the parts that were missing would be sent out the following day. Mind you im on the east coast and the post office was closed so I was just calling ballistic for direction on how to precide with them. A+ I'll order more frequently from now on.

Exactly what i needed.

Exactly what I was looking for. Couldn’t be happier!

very heavy construction and well thought out design with nice clean welds inside and out. Easily clears stock steering tie rod on 79 Ford high pinion D44 front axle. Included cover mounting bolts are longer than stock so I highly recommend cleaning the threads in the axle housing with a flat bottom tap before installing the cover.